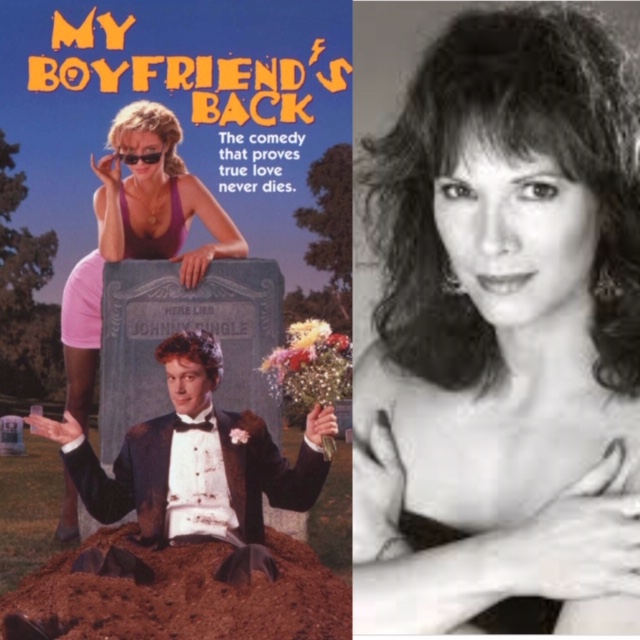 The Angels sweet, valedictory take on My Boyfriend’s Back has insured that number a place in musical history. Their original version has even appeared in Matinee, Joe Dante’s loving nod to genre cinema and its great showmen. It was also the obvious inspiration for the beloved early ‘90s, Sean S. Cunningham produced horror-comedy My Boyfriend’s Back.

As with many iconic ‘60s songs, there have been a multitude of cover versions to charm and/or amuse the ears. Everyone from Kristy and Jimmy McNichol to Melissa Manchester and The Raveonettes have put their mark on this cheery yet revenge fueled composition.

One of the favored takes was provided by popular soap actress Sharon Gabet in the early ‘80s. At the time of the recording, Gabet was starring as Raven on the gothic mystery sudser Edge of Night. Nicely, the dark rhythms of that show’s plotlines emerge in the pulsing backgrounds in this harder edged takeover.

Gabet, a veritable soap hopper who also appeared on Another World and One Life to Live, is now the author of a number of  books including From Raven to the Dove, which beautifully describes her seven year experience working on Edge and her life since then. 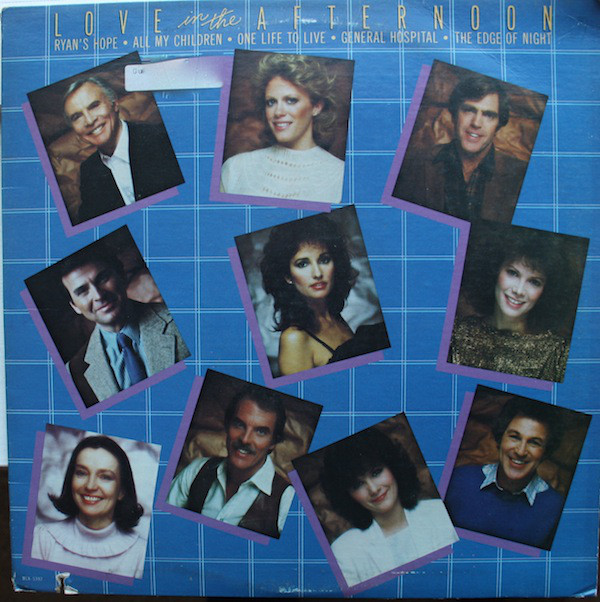 P.S.: Those with sharp ears might even catch Donna De Lory’s vocals on the background of this track. De Lory, of course, has long been a part of Madonna’s roving troupe of players and is an established solo artist in her own right, as well. 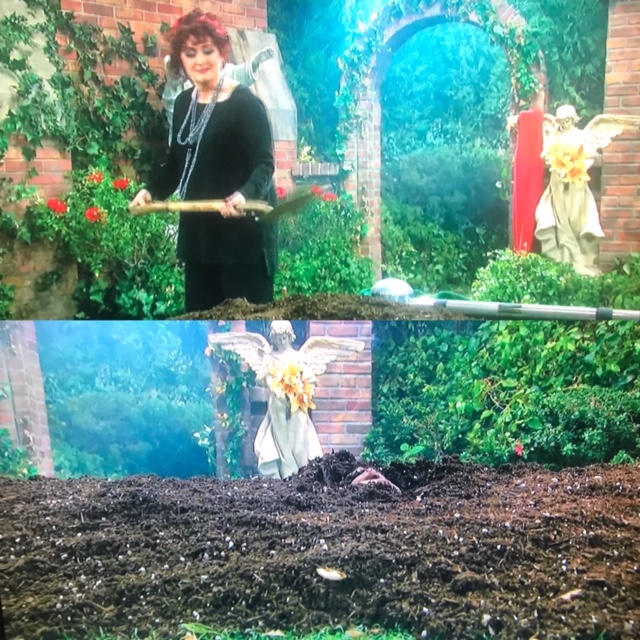 It is starting to smell like Halloween in Salem! In the past few weeks, the setting place of (the long running soap opera) Days of Our Lives has had long lost characters rise from the dead while a mad scientist runs amuck, his chemical concoctions exploding around him! One of the show’s major heroines has also just been kidnapped by a silent, shrouded figure.

One recent ghoul stained returnee has even taken a deadly shine to some of her old, mischievous tricks. Vivian Alamain (currently being played by daytime icon Robin Strasser) has always had a thing for burying folks alive…but her latest victim Kate Roberts (the incomparable Lauren Koslow) wasn’t giving up her mortal coil easily. After being shot by Vivian and covered in graveyard dirt, this resourceful anti-heroine crawled out of her makeshift resting place and dragged her nearly expired glam gal self to the local hospital. Naturally, as the writers stretch out this macabre yarn, Kate’s life still hangs in the balance…and Vivian is prowling the hospital corridors, hoping to drag her off of that precarious ledge. 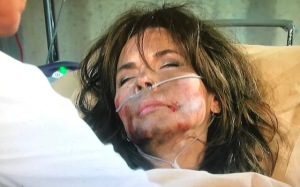 Of course, this is all being done with a sense of grand, over-the-top fun. But more than anything, it’s been a twisted joy watching glamorous, dedicated pros like Strasser, who gets more assured and enjoyably cunning with every appearance, and Koslow go at it with few (if any) holds barred. The producers also, nicely, gave longtime soap lovers a special treat by recently reuniting Strasser and Kassie DePaiva, who plays town pariah Eve with distinctive panache, for a brief scene. For decades these legacy performers went at it with love (and occasional wraith) as aunt and niece, respectively, on the late lamented One Life to Live. 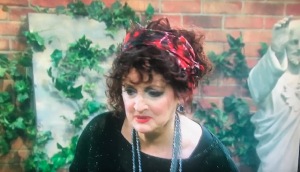 Intrigued by all this deadly, pumpkin spiced mayhem? Well, be sure to tune in, daily, at https://www.nbc.com/days-of-our-lives. 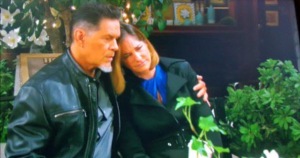 A ghost is scary. But, a soap opera character disappearing into thin air…now that’s truly terrifying!

Of course, that is exactly what seems to have happened with Days of Our Lives’ Eve Donovan, so passionately portrayed by Evil Dead II’s irreplaceable Kassie DePaiva. The victim of several unfortunate plotlines during her year and a half run, DePaiva’s Eve was written out of the show by the current powers-that-be. But any fans hoping for a wrap-up of her adventures on the character’s final airdate were in for a rude surprise.

In fact, as of this writing, Eve is still actually in the middle of several storylines. As of Tuesday, February 2nd (her last episode), she was dealing with a tentative reconnection with an ex-husband, as well as the complications of being the sometime girlfriend of Days’ powerful district attorney. Most importantly, she is still (supposedly) acting as the singing mentor to one of the show’s teens, Claire, with an audition at Juilliard for the young girl in the offing. Even more strangely, on her final show, Eve had a run-in with Claire’s mother, Belle, a legacy character, setting up what should have been an interesting rivalry. Frankly, it was one of the most confusing (non) exits in soap opera history, and DePaiva, who invested the character with grit and remorse, deserved so much better.

Of course, earning an Emmy pre-nomination for her work (as Eve dealt with the murder of her only child) must surely be some kind of comfort to DePaiva, a distinguished soap opera veteran, and her loyal fans. She will, also, be making a truly fun appearance on the Valentine’s Day episode of Castle, where she will reunite with a bevy of her former One Life to Live co-stars. 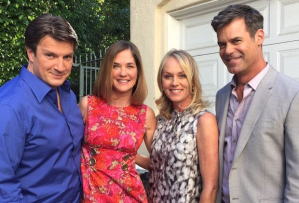 Still…if Days viewers do happen to catch a stray, toned leg high stepping to a sophisticated beat or a thin, bedazzled arm gesticulating wildly in the background…they should have no fear. It’ll just be poor old Eve trying to fight her way out of sudden invisibility…something that the glorious DePaiva will never have to worry about. 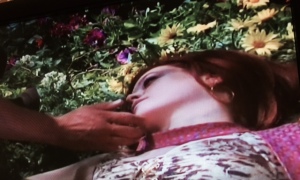 Josh Griffith, the newly established co-head writer of Days of Our Lives, revealed in a recent issue of Soap Opera Digest that he wants Days to be the “Hitchcock” of daytime television. If that’s the case, then Griffith (and collaborator Dena Higley) must be thinking Frenzy, Hitchcock’s latter day horror effort, which featured a lovely lady victim (or two) being tightly squeezed about their throats. Their first big plotline, effectively erasing some of the previous regime’s newer characters, is a serial killer adventure featuring a creepy strangler known as The Necktie Killer. 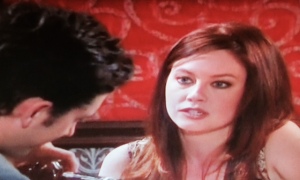 First to go was Serena Mason, a diamond smuggling hottie who had demolished the heart of Eric, the local ex-priest. Played by the popular Melissa Archer, known to many as One Life to Live’s Natalie, this character spent many months chasing after a ceramic elephant, which contained the hot jewels. Of course, the viewing audience didn’t know why Serena was chasing after the object, thus one of the more ridiculous (and longwinded) plots in daytime television was born. “I swear I saw two elephants!!”

Archer, of course, committed to the work with skilled passion and truly seemed to be catching her stride as the albatross of her story was slowly being worn away. When Eric was in danger, in a recent plot twist, her horrified concern was palpable, giving audiences a true taste of her talent and making her misuse, by the previous writers, all the more apparent. But her early exit was probably inevitable, from the get go. Instead of a slow build, which all soap fans know is necessary for a new character, within weeks Serena was going head to head with the show’s main vixen, Nicole, a sure death knoll for any foundling mistress of destruction. Archer deserved much better, although she did look glorious in all her final red necked glory! 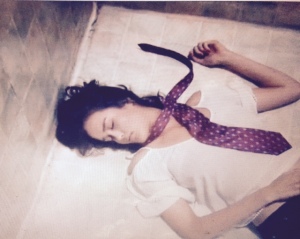 Sadly, the next victim was sweet Paige Larson, enacted by the gorgeous True O’Brien, who was growing stronger as a performer, every day. Part of the show’s (sort of) innocent teen romance, Paige had witnessed (the prime suspect) Chad DiMera’s last wrangle with Serena and, as this (slightly less than) proper young gent is being framed for the crimes, she was the next to go.

This gave the divine Kassie DePaiva (Evil Dead II’s sassy Bobby Joe), who plays Paige’s deceitfully stunning mother, Eve; room to truly indulge in her multiple talents. Her anguish over her estranged daughter’s death was full of heart wrenching emotion, but done to subtle effect by the well toned DePaiva, who also spent years as one of One Life to Live’s most popular anti-heroine’s Blair. As Paige’s long lost father, played by another daytime dynamo, A Martinez (Curse of Chucky, Mega Python Vs. Gatoroid, Not of this World), has arrived on the scene, DePaiva has compelled even further. The stunning weariness she is bringing to Eve is a master class in economy and it is a shame, especially now that Martinez’s character is being tied into one of the show’s core families, that the powers-that-be have let her go. This is truly an unfortunate mistake on their part. 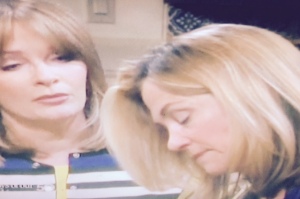 Of course, they know better than to play such games with Deidre Hall, who plays the show’s iconic leading lady, Dr. Marlena Evans. Hall was nearly killed off, in a similar storyline decades ago, and the fans took to the streets in protest. So, the attack on her this week by the killer, found this record breaking psychiatrist, breathlessly, surviving her rose hued asphyxiation…after a week of hypnotization attempts on the increasing frantic Chad, who now has reason to believe that he is being set up, but doesn’t have the proof.

Hunky Ben does, though. …and Chad will probably live to regret his eternal love for Ben’s fiancée, Abigail. Thursday’s episode revealed the troubled Ben to be the man behind the recent slayings, an almost unsurprising denouement. Although, red herrings do still abound…the respectable Dr. Dan as a Scream style co-conspirator, anyone?…and the weeks to come are sure to be filled with more suffocating mysteries and muffled mayhem…so, stay tuned! 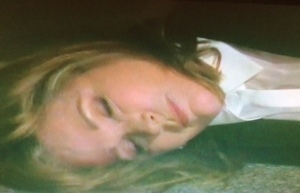