It may have been tough for Regina, a perky ‘80s pop wonder, when her vocal style was called out for being too reminiscent of Madonna’s. The talented songstress had already fronted a popular New Wave band and had her lyrics covered by other established artists.

But this last week, Baby Love, her most notable song, proved to be far more irksome to Scream Queens’ most pompous rascal, Chad Radwell (the irreplaceable Glen Powell). As Chanel Oberline, the character’s glorious intended, marched down the aisle to the song’s sweetly unforgettable bubble gum aura , the audience soon was surprised by the plummeting lifelessness of Radwell’s body as it hit the altar, dead on impact!

The song’s innocent joyfulness was the perfect contrast to the macabre circumstances and proved, once and for all, that pop music is, indeed, killer! 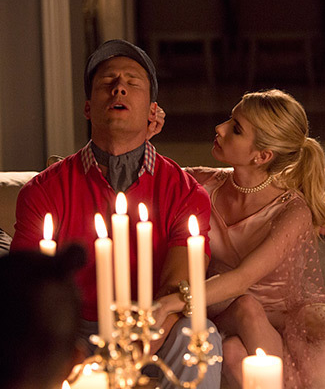 One comment on “Music to Make Horror Movies By: Scream Queens”